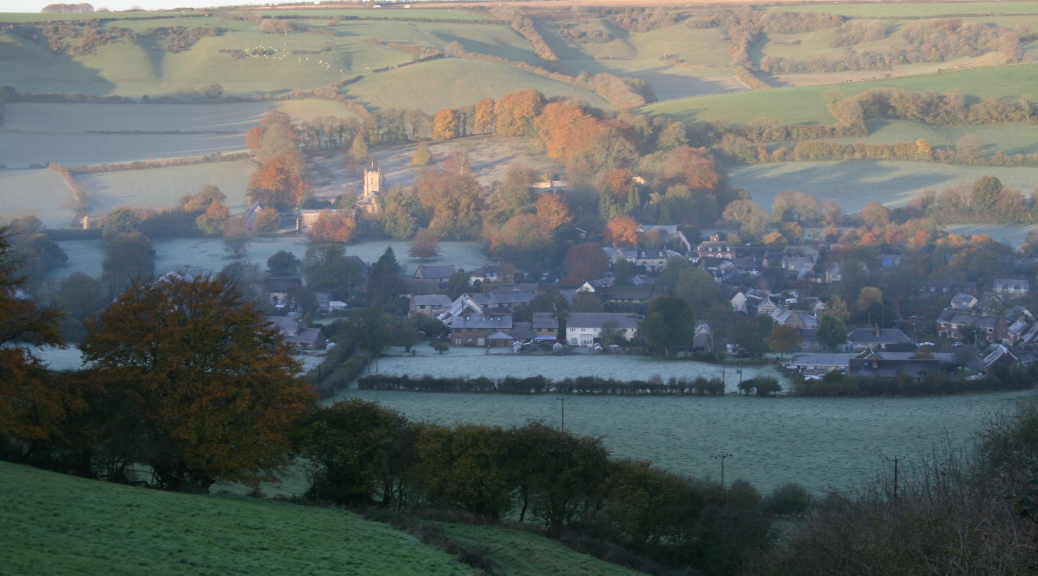 It’s been a delightful few months, bashing away at my new novel. I decided that I wanted to do something in the haunted house line, but with a twist. Not that there’s anything wrong with the classic setup of wronged spooks roaming a creepy old building. I love books like that. One joy of the ever expanding horror market, is new authors bringing their own perspective on that delightful, tried and tested formula.

Towards the end of 2013, I rented a cottage in the small Dorset village of Sydling St. Nicholas. As a keen walker, I spent time traipsing through the surrounding valleys and enjoying The Wessex Ridgeway. During a climb from Cerne Abbas up to the broad ridge (from where the word ‘Sydling’ derives) I mused what a wonderful spot it would be for a windswept haunted house. Five and a half years later I built one there (in fictional literary terms at least), and you can now read about it in ‘Caveat Emptor.’

A number of real-life local spots feature in the book, including Sydling St. Nicholas, its church and the beautiful river walk, Cerne Abbas, St. Mary’s, Giant Hill and the street of Tudor cottages outside the old abbey that form the lead character’s flat in the story. You’ll find a few snaps I took from those locations, scattered throughout this blog post.

The tale predominantly focuses on thirty years in the life of David Holmes, a twenty year old man who moves over from Wiltshire in 1985, to become a Dorset estate agent. His first day on the job finds him performing a visit to a fire-damaged manor that pre-dates the English Civil War. Recent occupants died during the conflagration, and the house will be one of his responsibilities for sale.

Among the distinct joys of writing this book, I’ve most delighted in taking a trip down memory lane. Cars, fashions, technology, music, films, attitudes and current events are all used to set the scenes. From ‘Live Aid’ in 1985 through the ’87 hurricane, ’89 fall of the Berlin Wall, millennium bug, dot-com collapse, 911 attacks and 2015 Conservative win, there is a rich backdrop against which to present the various scenes. However, this was not done just for the heck of it. The principal antagonist is an ancient entity for whom unfolding centuries are a solitary agony, punctuated by occasional decades of joy. I won’t go into the source of that joy, because: spoilers! But observing David’s relatively brief life and the changes that occur, place the entity’s torment into a much clearer perspective.

I took a big risk at the climax as – while the ‘baddie’ element is defeated after a fashion – it’s not quite vanquished in the way a reader might expect. I guess it’ll be the ‘Marmite’ of Horror/Paranormal Romance/Supernatural Suspense, in that they’ll either love it or hate it.

At the time of writing, ‘Caveat Emptor’ is available for pre-order in Kindle format, ahead of its 25th March release date. As with my other work, a paperback version will roll out around the same time. Should you clock the Amazon page count on the pre-order, please ignore it. They always under-read by a huge margin. The book is 81,000 words/348 pages in a 5.25 x 8 paperback. Once the product descriptions are linked on Amazon, the Kindle page count will correct to reflect the actual length based on the print version.

Do you believe a house can have a soul?

If you had asked that question to David Holmes back in 1985, it might have given him pause. The next three decades of his career as a Dorset estate agent, provided a very definite answer.

Meoria Grange is an impressive manor, built around the time of the English Civil War. It stands sentinel atop the Wessex Ridgeway, occupying a site of historical importance dating back into the mists of British antiquity.

When a family move in to renovate after a tragic fire, horrific outcomes draw David ever closer to their disturbing source.

Similar repetitions unfold each time he instigates another sale, until a very personal impact causes him to seek out some answers once and for all.

How can pure love and abject horror exist together with such inexplicable harmony?