Regular readers will be aware that the fictitious town of ‘Ardenham’ from ‘Maria’s Walk’ is actually based on Faversham, my hometown on the Swale Estuary in Kent.

Maria herself was also inspired by a famous, real-life spectre known as ‘Diana.’ The book is dedicated to her. Maria’s character in the story is loosely drawn from a number of local speculations about who Diana may have been (albeit with much invention and embellishment to bring the plot to life).

Here are a few locations that inspired places in the book, with appropriate quotations and the odd note for your enjoyment.

Let’s start with the title image from this post. 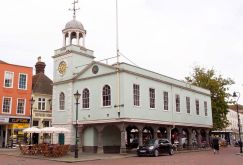 The guildhall stood an elegant, green, rendered structure with high, arched windows. The building rested on thick wooden stilts allowing a market to be held underneath. Once the local court house, it also featured a clock, flagpole and weather vane in the shape of a dragon. All around, wonky timber-framed buildings with high-pitched roofs clustered about the three principal streets that fed into this oft-photographed civic space.

On the other side of Dark Hill sat Westbrook Pond, fed from the Westbrook Stream that eventually flowed into Ardenham Creek in the centre of town. Lavington church reflected down into the mirror-like calm water from a tree-lined ridge above, and proved a popular scene for artists and photographers of all flavours. Jack had many fond memories of feeding the ducks there with his grandparents, whenever they came down to stay at Christmas back in the Seventies.

(Description based on the inn during the Regency period, as seen in a psychic dream by Gaby. It’s worth mentioning that the actual pub which inspired it – ‘The Anchor’ – is a great place to visit today. You can still sit in the room out back, where Richard Belmont meets with his henchmen in the book).

‘The Mermaid’ was a large, tumbledown, timber-framed old inn squatting at the far end of Abbey Street. The place sat just before the wharf entrance to Ardenham Creek, where sailing vessels loaded and unloaded their cargo. Its reputation as a dirty, over-crowded den of cutthroats and villains of all shapes and sizes was well deserved. If you were a merchant, deckhand or salty sea dog in search of rough grog, a good fight, or pox-infested tumble with a coarse strumpet, you need go no further into town. The more genteel population of Ardenham secretly hoped the inn would never burn down nor shut its doors. While there were certainly other rough drinking establishments, fleshpots and diverse dens of iniquity to be found close by, its proximity to the embarkation/disembarkation point of maritime crews kept some of the rougher elements at arm’s length. Many never went any further than ‘The Mermaid,’ unless they had other business to attend to.

(Note that the description doesn’t match the image here, as the building had a facelift during Victorian times. The reason this is an old black and white photo, is due to the fact the manor – Syndale – suffered a dramatic fire and was torn down in the 1960’s. Today there is a motel and gym on the site, which does indeed offer a commanding view of the estuary and town).

Their cork heels crunched on the gravel path. It led up to the tall pillars that supported a shady front porch fronting Glyndale Park Manor. White rendering shone in the late September morning sun, affording the impressive structure an almost ethereal quality to match its palatial grandeur. Even though the old place had clearly seen better days – particularly when examined up close – it was still an elegant former residence.

Gaby angled her head to look at Ardenham nestling in the shallow, rolling valley behind and just to the right of Abbey Wood. Above the assorted roofs, Lavington church could clearly be seen standing sentinel atop Dark Hill. Beyond, the estuary sparkled like a shimmering blanket of sequins.

(There are of course many sinister descriptions of Abbey Wood in the book. The real place – ‘Bysing Wood’ – can be pretty wild and creepy at times. However, since I have a more pleasant photo here of some bluebells in spring, I’ll include a quotation from near the end of the story).

Gaby grabbed his arm with a gasp, glancing around. “Jack, do you realise where we are?”

Jack studied his surroundings more closely. “Goodness. I hardly recognised it with all the carpets of bluebells. It’s the dell.”

So there you have it. I hope you enjoyed this little tour around Ardenham.